Sudden infant death syndrome (SIDS) is the sudden, unexplained death of a baby younger than one year of age that does not have a known cause even after a complete investigation. This investigation includes performing a complete autopsy, examining the death scene, and reviewing the clinical history.

When a baby dies, healthcare providers, law enforcement personnel, and communities try to find out why. They ask questions, examine the baby, gather information, and run tests. If they cannot find a cause for the death, and if the baby was younger than one year old, the medical examiner or coroner will call the death "SIDS."

If there is still some uncertainty as to the cause after it is determined to be fully unexplained, then the medical examiner or coroner might leave the cause of death as "unknown." 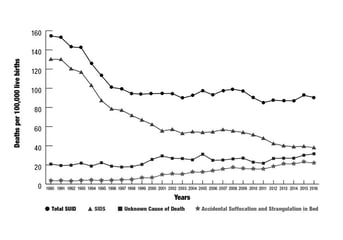 What Sudden Infant Death Syndrome Is Not

Each year in the United States, thousands of babies die suddenly and unexpectedly. These deaths are called "SUID," which stands for "sudden unexpected infant death."

"Sleep-related causes of infant death" are those linked to how or where a baby sleeps or slept. These deaths are due to accidental causes, such as suffocation, entrapment, or strangulation. Entrapment is when the baby gets trapped between two objects, such as a mattress and a wall, and cannot breathe. Strangulation is when something presses on or wraps around the baby's neck, blocking the baby's airway. These deaths are not SIDS.

Other things that SIDS is not:

More and more research evidence suggests that infants who die from SIDS are born with brain abnormalities or defects. These defects are typically found within a network of nerve cells that send signals to other nerve cells. The cells are located in the part of the brain that probably controls breathing, heart rate, blood pressure, temperature, and waking from sleep. At the present time, there is no way to identify babies who have these abnormalities, but researchers are working to develop specific screening tests.

Even though the exact cause of SIDS is unknown, there are ways to reduce the risk of SIDS and other sleep-related causes of infant death.

Even though it is not known the exact cause of SIDS, it is known that some things can increase a baby's risk for SIDS and other sleep-related causes of infant death. The good news is that there are ways to reduce the risk.

Research shows that several factors put babies at higher risk for SIDS and other sleep-related causes of infant death. Babies who usually sleep on their backs but who are then placed to sleep on their stomachs, such as for a nap, are at very high risk for SIDS.

Babies are at higher risk for SIDS if they:

Research shows that there are several ways to reduce the risk of SIDS and other sleep-related causes of infant death. Some of them are discussed below:

The back sleep position is the safest position for all babies, until they are one year old. Babies who are used to sleeping on their backs, but who are then placed to sleep on their stomachs, such as for a nap, are at very high risk for SIDS.

If baby rolls over on his or her own from back to stomach or stomach to back, there is no need to reposition the baby. Starting sleep on the back is most important for reducing SIDS risk.

Preemies (infants born preterm) should be placed on their backs to sleep as soon as possible after birth.

Can My Baby Choke If Placed on the Back to Sleep?

The short answer is no-babies are not more likely to choke when sleeping on their backs.

Use a Firm and Flat Sleep Surface, Such as a Mattress in a Safety-Approved Crib, Covered by a Fitted Sheet with No Other Bedding or Soft Items in the Sleep Area

Never place a baby to sleep on soft surfaces, such as on a couch, sofa, waterbed, pillow, quilt, sheepskin, or blanket. These surfaces can be very dangerous for babies. Do not use a car seat, stroller, swing, infant carrier, infant sling, or similar products as baby's regular sleep area. Following these recommendations reduces the risk of SIDS and death or injury from suffocation, entrapment, and strangulation.

A crib, bassinet, portable crib, or play yard that follows the safety standards of the Consumer Product Safety Commission (CPSC) is recommended.

Why Should I Not Use Crib Bumpers in My Baby's Sleep Area?

Evidence does not support using crib bumpers to prevent injury. In fact, crib bumpers can cause serious injuries and even death.

What If I Fall Asleep While Feeding My Baby?

It is less dangerous to fall asleep with an infant in an adult bed than on a sofa or armchair. The latest safe sleep recommendations include precautions in case you fall asleep while feeding your baby.

Share Your Room with Your Baby. Keep Your Baby in Your Room Close to Your Bed, but on a Separate Surface Designed for Infants, Ideally for Your Baby's First Year, but at least for the First Six Months

If you bring your baby into your bed for feeding or comforting, remove all soft items and bedding from the area. When finished, put your baby back in a separate sleep area made for infants, such as a crib or bassinet, and close to your bed.

Couches and armchairs can also be very dangerous for babies if adults fall asleep as they feed, comfort, or bond with the baby while on these surfaces. Parents and other caregivers should be mindful of how tired they are during these times.

There is no evidence for or against devices or products that claim to make bed sharing "safer."

Can I Practice Skin-to-Skin Care as Soon as My Baby Is Born?

Yes, when mom is stable, awake, and able to respond to her baby.

Do Not Put Soft Objects, Toys, Crib Bumpers, or Loose Bedding under Baby, over Baby, or Anywhere in Baby's Sleep Area

Keeping these items out of your baby's sleep area reduces the risk of SIDS and suffocation, entrapment, and strangulation. Because evidence does not support using them to prevent injury, crib bumpers are not recommended. Crib bumpers are linked to serious injuries and deaths from suffocation, entrapment, and strangulation. Keeping these and other soft objects out of a baby's sleep area is the best way to avoid these dangers.

To reduce the risk of SIDS, women should:

Pacifiers reduce the risk of SIDS for all babies, including breastfed babies.

Do Not Let Your Baby Get Too Hot during Sleep

Dress your baby in sleep clothing, such as a wearable blanket designed to keep her or him warm without the need for loose blankets in the sleep area.

Dress your baby appropriately for the environment, and do not overbundle. Parents and caregivers should watch for signs of overheating, such as sweating or the baby's chest feeling hot to the touch.

Keep the baby's face and head uncovered during sleep.

Can I Swaddle My Baby to Reduce the Risk of Sudden Infant Death Syndrome?

There is no evidence that swaddling reduces SIDS risk. In fact, swaddling can increase the risk of SIDS and other sleep-related causes of infant death.

Vaccines not only protect the baby's health, but research shows that vaccinated babies are at lower risk for SIDS.

Avoid Products That Go against Safe Sleep Recommendations, Especially Those That Claim to Prevent or Reduce the Risk for Sudden Infant Death Syndrome

There is currently no known way to prevent SIDS.

Evidence does not support the safety or effectiveness of wedges, positioners, or other products that claim to keep infants in a specific position or to reduce the risk of SIDS, suffocation, or reflux. In fact, many of these products are associated with injury and death, especially when used in the baby's sleep area.

If you have questions about using these monitors for other health conditions, talk with your baby's healthcare provider, and always follow safe sleep recommendations.

Supervised tummy time helps strengthen your baby's neck, shoulders, and arm muscles. It also helps to prevent flat spots on the back of your baby's head.

You can also help prevent flat spots by limiting the baby's time spent in car seats (once the baby is out of the car) and changing the direction the infant lays in the sleep area from week to week.

Our immune system is what protects our bodies from bacteria and viruses that can make us sick. Our...
Read More

When you breastfeed, you give your baby a healthy start that lasts a lifetime. Breastmilk is the...
Read More

New Year’s Resolutions? Commit to your health and wellness!

It’s that time of year again. With the best of intentions, approximately 40% of Americans...
Read More